Olivier and Sven goofing around in Asia

« Back to Our Travel Blog « Older Entry | Newer Entry »

I last wrote about one of my Airasia flights being cancelled. well, everything worked out well. I e-mailed the person responsible to ask them what to do and it turned out that actually both of the flights I would be taking were cancelled, so they just booked me on the next flights. The only downside was that I would arrived 1,5 hrs later in Singapore but that wasn't a big deal. 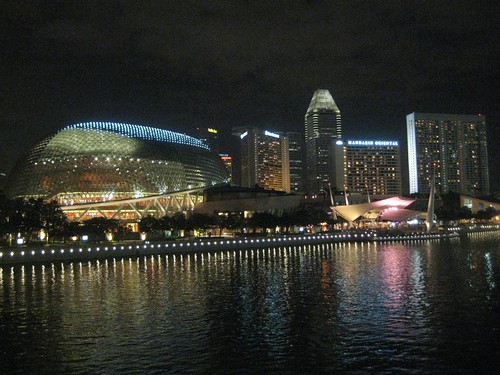 When I arrived my Belgian friend Nathalie (who had been travelling around New Zealand for 3 months) was already waiting for me. It was great seeing her again and we had a lot of catching up to do. Bad news was that she had broken her foot in New Zealand; she had to wear a moon boot and was supposed to rest for 6-8 weeks.

As I hadn't been able to find a couch for the first few days and as I didn't want to have to stroll around the whole city to find accommodation - especially regarding Nathalie's condition - I had booked a hotel in advance. The price was reasonable (to Singaporean standards that is :p), the people were friendly and the location was perfect: very close to an MRT station. After we checked in, we decided to check out the food stalls right next to the MRT station. The food was cheap and delicious and the rest of the evening we exchanged travel stories over a few beers.

The next day we decided to do some sightseeing. We went to Clarke Quay and Chinatown. Walking around Chinatown, Nathalie had been talking about our hearing getting worse. Both of us sometimes experience problems trying to understand a conversation in noisy places. The subject popped up because my ear was hurting a bit - it got irritated after using ear plugs a while ago and I think flying made it worse. In the afternoon we bumped into this hearing aids' shop which had a sign "free hearing test", so we decided to check it out. We told the owner of the shop (a German woman) about our "hearing problem" and she confirmed that it's quite normal nowadays - there's a lot of noise everywhere, people use cell phones, listen to loud music - so it's normal that people get hearing problems at a lower age. What Nathalie and I are experiencing however, is not a hearing deficiency, but has to do with the brain not being able to interpret all the signals in time - that's why we can't understand others very well in noisy places. After that, we both took the hearing test. Nathalie's test was ok. My test showed that my right ear has slightly diminished hearing, but that ear was hurting so the irritation might be the cause - will test again when it's healed though. After that we had a nice chat with the shop owner about travelling, her moving to Singapore and life there, quite interesting. 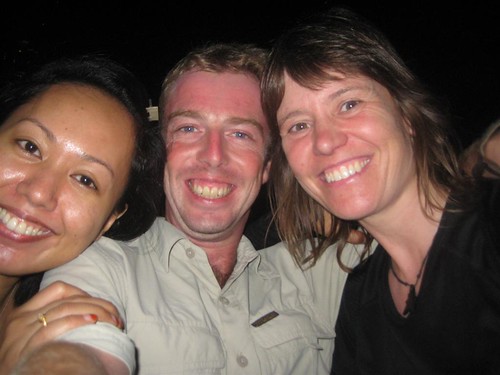 In the evening we met up with my friend Elin. In December I had only met up with her briefly because her grandmother was in the hospital then. It was great to see her again and she showed us around Clarke Quay, the Esplanade, the casino and told us about the different places and the history. 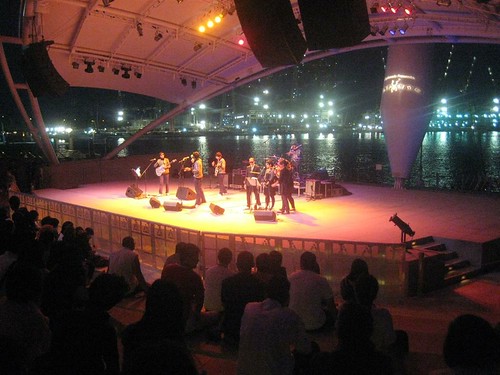 The next morning I received great news from Angela, a cs'er. She couldn't host us herself as she's in the middle of moving into a new place, but we were welcome to stay at Cheryl's (a friend of hers) place. During the day Nathalie and I did some more sightseeing (well, she was supposed to be resting her foot but she was too stubborn to do so :p), checked out the area around Arab Street and Mustafa Center. In the evening we met Angela and her boyfriend, Cheryl and Simon - a German cs'er. We had some Indian food first, then moved into Cheryl's place. We had a few drinks, chatted and had great fun at Cheryl's place. We got along really well and felt at home already 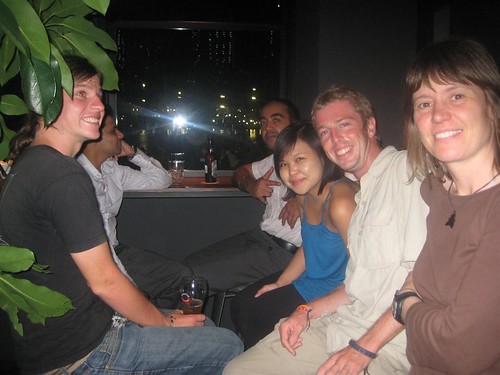 The next day we met my friend Mae for lunch and decided to try the Hokkien Mee at Lau Pa Sat - delicious. After that we decided to check out a computer fair. Nathalie bought a small form laptop there (she had been planning to buy one for a long time, but the special promotions made it worth checking it out and buying it here) and Mae wanted to check out a camera she was planning on buying. When we left the building Nathalie's foot was hurting, so we decided to have some ice cream along the esplanade. There we met up with Linda, who had guided me around the city centre in December. 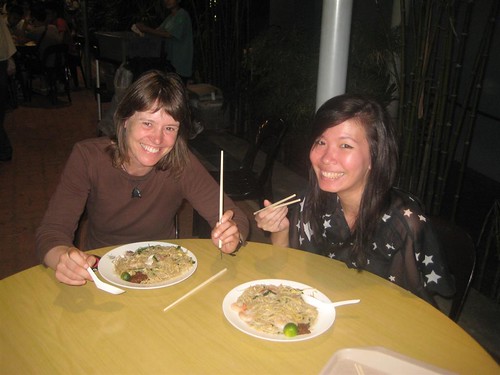 At night we met Angela and Cheryl. We had dinner and decided to check out a live performance at the Esplanade. The atmosphere was great, but the band - The Pinholes - sucked

Later on Simon, Ashish and a friend of his joined us. We went to a bar and had a lot of fun. I was very exhausted when I got home though, as my ear was getting worse. It didn't hurt but it was blocked so I had a hard time conducting conversations in the noisy pub :$ I decided to wait a few more days, but go to a doctor if it wouldn't get better soon.

The next day Nathalie and I decided to check out Sentosa Island, one of the only getaways from the busy city centre, but very artificial. I didn't really want to go there before, but seeing we were in Singapore anyway we decided to check it out. We had a nice day but it was exactly how people had described it - artificial. We spent some time on the beach, but the beaches weren't that nice as they were facing the harbor. 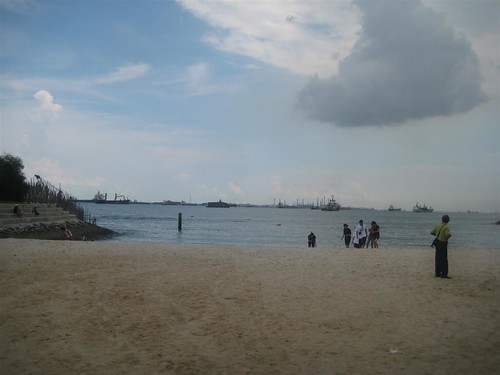 In the evening Cheryl joined us and we went to Elin's place. She had invited us for a traditional dinner. She told us all about the culture, the tradition, the food, her religion (islam), Quite interesting, but we had to get used to eating with our hands though. Well if you think it's easy, try eating chicken by only using your right hand, and try not to make a mess

After dinner we looked at Elin's wedding video. She got married to a German guy in April; I was invited to the wedding but couldn't make it because I had friends coming over to the Philippines. 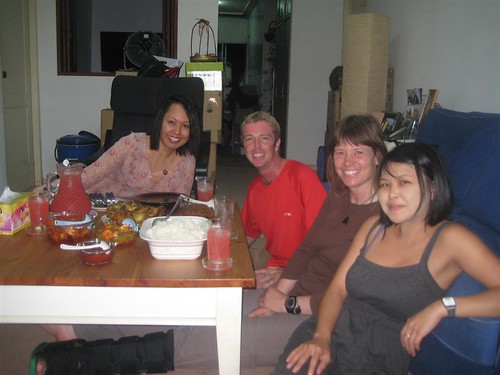 Well it was great catching up with friends and spending time with our new found friends, but I had spent time enough in Singapore. Once again, a beautiful city but apart from shopping and nightlife it doesn't have much to offer. Time to move on

Oops, you forgot something.

The words you entered did not match the given text. Please try again.